THE SYMMETRICAL TUNING OF THE TENOR BANJO

A symmetrical tuning is a tuning that has the same musical interval between each string.  In western music, the four main instruments in the string family all have a symmetrical tuning.
These are violin, viola, cello, bass.
All except the bass are tuned in fifths.  A bass is tuned in fourths.  The mandolin family copies these tunings in fifths:
mandolin = violin
mandola = viola
mandocello = cello

-This relates to the tenor banjo because standard tuning for a tenor banjo is tuned the same as a viola/mandola (C, G, D, A).  Irish players often tune their tenor banjos also in fifths, but one octave below a violin/mandolin (G, D, A, E).
What is a Tenor Banjo ?
-A tenor banjo is a short necked banjo that has 4-strings.
-Nobody really knows where the name "tenor" banjo came from.  By calling it a "tenor" it gives the impression that it would be a lower pitched instrument because in classical four part harmony, the parts go from high to low, soprano, alto, tenor, bass.
This is not the case.  When compared to other banjos, it is the highest pitched.

-There are two variations of this instrument, a 17-fret and a 19-fret type.
-The more standard type is the 19-fret, though the 17-fret is very common amongst Irish players because the smaller scale length makes it a bit easier to play the quick reels and triplet passages in that style of music.
-The tenor banjo was originally made for viola players to double on, that is why it is tuned the same as a viola.  The “Irish” tuning makes it easy to play the fiddle melodies in Irish music because of it being the same as violin, only an octave lower.


By nature, the tuning of the tenor banjo in fifths inherently has a major advantage in that chord voicings and scale patterns are symmetrical. The intervallic relationship between an adjacent string is the same.  This means that if you make a triad on the fourth, third, and second strings with the root in the bass, a triad shape would be the same if you moved it up one set of strings to the third, second, and first strings.

​The same type of thing works with scalar patterns.  The shape of a major scale on the fourth and third strings would be the same as if you moved it to another set of strings, let's say the third and second. 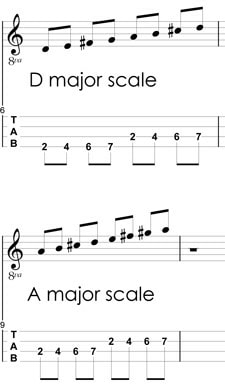 This allows you to transpose any lick anywhere on the neck without changing your fingerings.  For instance, if you had a D chord lick, you could easily transpose that to an A chord lick by just moving it up one set of strings.  This all greatly reduces the number of different fingerings you need to learn for different licks, scales, and chord shapes.  The only downsides are that some classic guitar style blues licks are harder to reach, as well as the need to stretch a bit more to play a scale.

UNDERSTANDING TENOR BANJOS
​
-Tenor banjos are 4 string banjos that have a shorter neck and come in two varieties, the 17 fret and the 19 fret.
-The name “tenor” has nothing to do with a lower pitch such as a vocalist who is a tenor or a tenor saxophone. No one knows for sure where the name tenor came from, but many believe it was a mistake somewhere in history as these type of banjos were used during the American tango craze of the early 20th century and were often called tango banjos. Tango then erroneously became tenor somewhere down the line.
-Tenor banjos are generally used for jazz or Irish music.
-You can find them used in  a Jamaican form of music called Mento, a predecessor to reggae, and Moroccan music.  In both of these types of music you also see plectrum banjos being used or 5 string banjos without the 5th string on them.
-Tenor banjos are tuned in the musical interval of fifths.  This is the same as the string family in an orchestra - violins, violas, and cellos (except the bass).
-There are two common ways to tune them - both using fifths.


HOW TO TUNE A BANJO

PLECTRUM BANJO
C, G, B, D
The most standard plectrum banjo tuning.  This is very close to the standard 5-string tuning (without the 5-string), but the 4th string is dropped down to C.
D, G, B, E
This tuning is the same as the top four strings of a guitar and is often referred to as "Chicago Tuning".  This makes it very easy for guitarists to pick up a 4-string banjo and start playing.

5-STRING LONGNECK BANJO
E, B, E, G#, B
This is open E tuning.  Really it is the same as open G tuning, just 3 steps lower in pitch.